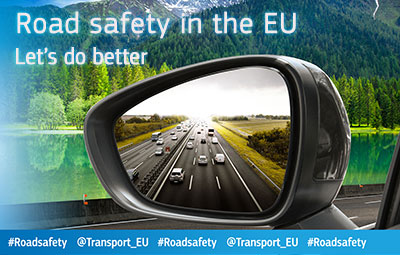 Road Safety Must be Top Priority for New Transport Commissioner

Globally over 1.3 million people die every year in road crashes. That’s more than die from diseases such as HIV, tuberculosis, and diarrhoea combined. Here in Europe over 25,000 people are killed every year in road traffic crashes. After significant reductions in the 1990s and early 2000s that number has remained stubbornly high, too high, for the past six or so years. It’s the equivalent of a jumbo jet a week crashing. We do not put up with it in aviation, so why do we tolerate it on the roads?

So the EU’s long term strategic goal of “Vision Zero”, i.e., no deaths and serious injuries on European roads by 2050, is the right one, but we can’t wait 30 years. So we should welcome the new Commissioner’s commitment to road safety. Adina-Iona Vălean, a former Romanian government minister, MEP and chair of the European Parliament’s Industry committee who took over from Violeta Bulc as European Commissioner for Transport from 1 December, declared that ‘25 000 (deaths) per year is simply unacceptable, and her objective of halving the number of road deaths and serious injuries by 2030 compared to 2020.’

To deliver that objective we need to see real action in 2020, and there must be some acknowledgement that the current strategy is no longer ambitious enough. I have long argued we need a new Transport White Paper to refresh and kick-start EU transport policy, to mainstream and co-ordinate decarbonisation, digitalisation and safety objectives, but above all make the pursuit of higher standards of safety,particularly road safety, an overriding priority.

We should also learn from the mobility packages that sometimes more is less. Although ambitious in scope the approach is not delivering the necessary, timely and focused legislative changes we need. So we need a new more focused approach which prioritises actions, and does not shy away from the tough decisions necessary to make our roads safer.

I remember leading the battle for road safety as an MEP on the Transport Committee against some of the car manufacturers. They sought to delay, frustrate and block our plans to radically change the design or cars to improve front and side impact protection,now known as the European New Car Assessment Programme (EuroNCAP). In the end we prevailed and improvements in vehicle safety design have reduced the risk of death and serious injury for car occupants by 50% or more. We need to see that determination and leadership again, to further improve vehicle and street design, and by integrating

technological and sustainability solutions we could drive forward similar improvements, particularly for vulnerable road users, pedestrians and cyclists as well as motor-cyclists and persons with disabilities or reduced mobility and orientation.

Just two areas could make a big difference. Firstly, the introduction of Intelligent Speed Assistance (ISA) measures needs to be sped up. Cutting speeds to less than 30km/h in urban areas for example would significantly reduce road deaths. Secondly, getting cars out of populated areas, or reducing and modifying road capacity to forcibly reduce road speeds in cities, towns and even villages, would make a huge difference.

In some areas we need regulation, in other areas research, in all areas we need to combine technology, decarbonisation and safety goals. But above all we need leadership. We should all wish Commission Adina-Iona Vălean well in her mission!

Mark Watts, is Director of LP Brussels, a former two-term Member of the European Parliament, and has been advising organisations and businesses on transport for over fifteen years. He writes in a personal capacity.